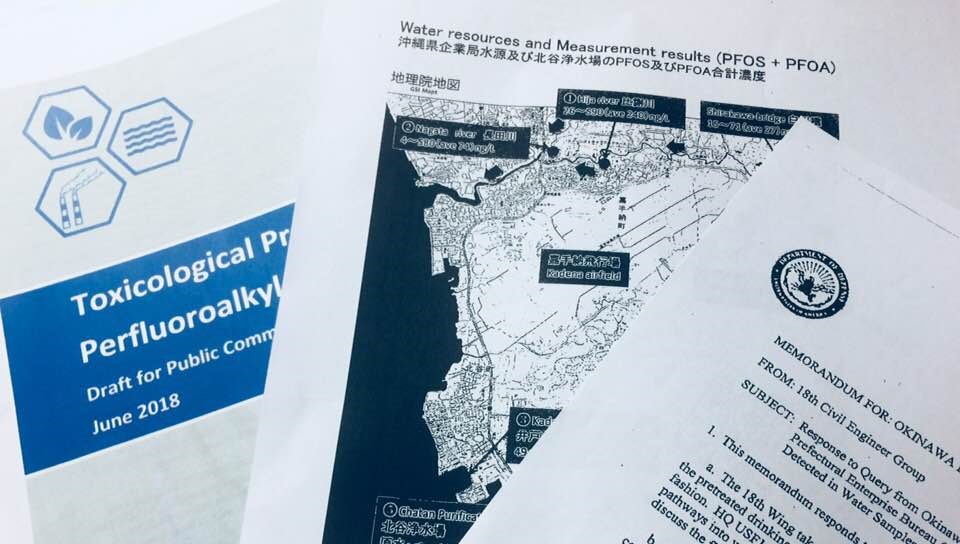 The Informed-Public Project (IPP) in Okinawa, Japan has been working on the issues of environmental contamination related to U.S. military bases in Okinawa. Recently IPP sent a letter to Okinawa Prefecture, requesting them to take strong measures to address the issues of PFOS/PFOA contamination caused by the U.S. military. The IPP letter incorporated findings and recommendations presented in ”Toxicological Profile for Perfluoroalkyls: Draft for Public Comment” released in June 2018 by Agency for Toxic Substances and Disease Registry.

On Okinawa Island, PFOS and PFOA have been detected around two U.S. bases, Kadena Air Base and MCAS Futenma. According to surveys conducted by Okinawa Prefecture, it is highly likely that US bases have caused the PFOS and PFOA contamination. An analysis of the data of the surveys by a local expert indicates that soil and water contamination by PFOS/PFOA should have occurred within both bases and that the substances are seeping into water sources.

To protect our drinking water, Okinawa Prefecture and the Japanese government have made efforts to work with the U.S. military, but to no avail so far. They requested Kadena Air Base (KAB) to permit them to conduct an on-site survey to identify sources of PFOS and PFOA contamination on the base. KAB has not given them permission. 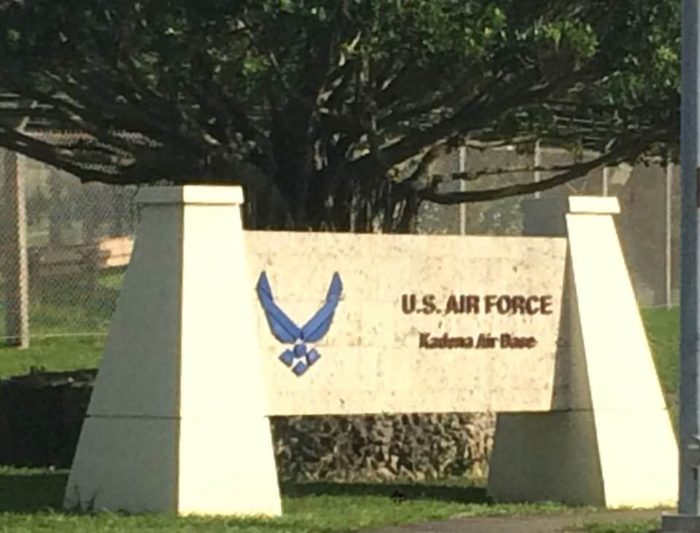 In the case of contamination caused by MCAS Futenma, Okinawa Prefecture requested through Japanese government the U.S. to hold a meeting to discuss the issues with Okinawa Prefecture. Marine Corps Installations Pacific declined to respond to the request because, according to the U.S. Marine Corps, “PFOS is not a regulated substance in the US and Japan”.

As in most of the states in the United States, Okinawa prefecture has used the U.S. Environmental Protection Agency’s Health Advisories (Has) as their guidelines and standards to evaluate the safety and quality of water contaminated by PFOS and PFOA.

However, following the release of ATSDR’s Draft Report, IPP has come to realize that more stringent safety standards and measures have to be adopted in Okinawa. IPP, therefore, wrote a letter of request to Okinawa prefecture, requesting them to review their policies on the issues of PFOS/PFOA contamination. 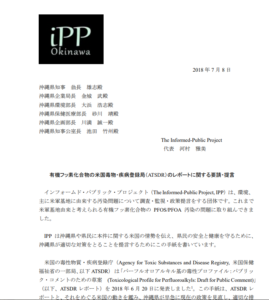 Our requests to Okinawa Prefecture are as follows:

1) Review the prefecture’s current policies on the safety standards for drinking water by examining recent policy revisions made by PFAS affected states and local communities in the US;

2) Review with municipalities and local communities the present protocols as to how to address the issues of PFOS/PFOA contamination for affected areas;

4) Review how the prefectural government’s bureaucratic sectionalism has hindered its ability to deal with PFOS/PFOA issues and develop an information-sharing and knowledge-building system to effectively address a whole range of PFAS contamination issues caused by PFOS/PFOA and other compounds;

5) Generate and spread information on PFOS/PFOA contamination issues throughout Japan and request the Japanese Government to make a strong commitment to solving the issues.

We also requested the prefectural government to be transparent and accountable to the people of Okinawa in developing and implementing new policies.

Two local papers (Ryukyu Shimpo, Okinawa Times) published articles on our letter.
We hope our action can raise public awareness on the issues.

For more details, we will upload articles on IPP site.

Lastly, we would like to express our appreciation to these civic groups and people in the U.S. for their support for us and for their engagement with the PFAS issues.