While concerns over toxic chemicals PFAS (per-and polyfluoroalkyl substances) have been spreading in the United States, the Federal Government, including the Environmental Protection Agency and the Department of Defense, appear reluctant to take action.

Responding to such concerns, however, the Senate Committee on Environment and Public Works held a hearing titled “Examining the federal response to the risks associated with per-and polyfluoroalkyl substances (PFAS)” on March 28, 2019.

Okinawa, the southernmost prefecture of Japan, also faces PFAS pollution. As in the case of many affected communities in the U.S., U.S. military bases in the prefecture have been regarded as the primary source of PFAS contamination. 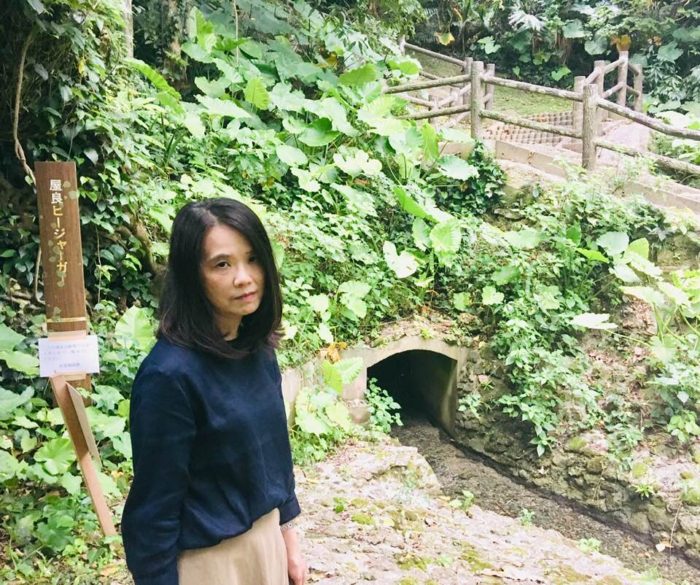 Yara Hija-ga (spring) , one of the PFAS contaminated sites in Kadena town. 1700ng/L (PFOS+PFOA) were detected in this spring. Survey results point to Kadena Air Base as the most likely source of contamination. Masami Kawamura, Director, the Informed-Public Project

The Informed-Public Project (IPP) has been working on PFAS issues in Okinawa, collaborating with activists and advocates of the United States. And our U.S. colleagues encouraged me to submit a statement to the Senate Committee on Environment and Public Works as the Committee held this important hearing.

I am glad and thankful that, with the help of Mrs. Kristen Mello, co-founder of Westfield Residents Advocating For Themselves, our statement reached Senator Ed Markey, one of the committee members, and the committee.

According to the hearing’s record, all the statements submitted by concerned citizens and experts including IPP have now become part of the committee’s official records.

In our statement, we request the committee to

1) Discuss and review the issue of PFAS contamination on the U.S. military’s bases overseas and affected local communities around the bases;
2) Hold the U.S. Military accountable for PFAS contamination on Okinawa by encouraging the U.S. Military to be more forthcoming with information and by collaborating with the Okinawa Prefectural Government to conduct surveys on the bases;
3) Recognize that the Status of Forces Agreement (SOFA) violates the environment and human rights of the people of Okinawa.

We hope our statement encourages U.S. Congress to pay attention to and take action regarding U.S. military-related PFAS issues in Okinawa and other parts of the world.

As the Director of the Informed-Public Project (IPP) in Okinawa, Japan, which has been working on the issues of environmental contamination related to the U.S. military bases in Okinawa, I write to inform you of the concerning situation of PFAS contamination in Okinawa and respectfully request you to take proper action.

PFAS Contamination on Okinawa
Okinawa, only 0.6% of Japan’s total area, has 70 % of the US military bases in Japan concentrated on its small islands. US bases occupy 15% of the entire area of Okinawa Island (the main island of Okinawa). The disproportionate concentration of US bases and their proximity to local communities have adversely affected the communities in various ways, and the issue of PFAS contamination is one of the most serious and urgent matters that call for the full attention of the US Government.

On Okinawa Island, PFOS/PFOA have been detected around two U.S. bases, Kadena Air Base (KAB) and Marine Corps Air Station Futenma (MCAS Futenma). According to surveys conducted by Okinawa Prefecture, it is highly likely that the two US bases have caused PFAS contamination. A local expert’s analysis of the survey data has also indicated that PFAS contamination should have occurred within the bases and PFOS/PFOA then would have seeped into water sources outside the bases.

A series of investigations by Jon Mitchell (correspondent reporter of Okinawa Times) using FOIA has revealed that KAB conducted on-site surveys on PFOS contamination in 2014, 2016 and 2017 (at 2 “hold ponds” and 16 “foam holding tanks”). It has also shown that US Military conducted surveys at MCAS Futenma in 2016 and PFOS (27,000 ng/L) and PFOA (1,800 ng/L) were detected from samples of wastewater from a fire pit training site on the base.
All the survey data available and analyses of them point to KAB and MCAS Futenma as the most likely sources of PFAS contamination on Okinawa.

Our Concern: PFOS/PFOA Affecting Sources of Drinking Water and Seeping into Agricultural Fields
I am very concerned that PFOS/PFOA have been detected in some of the sources of drinking water around KAB. For example, according to the recent report by the Okinawa Prefectural Enterprise Bureau (OPEB), the agency in charge of safeguarding drinking water, PFOS/PFOA (971ng/L) were detected in the Dakujyaku river in February 2019. (See this site http://www.eb.pref.okinawa.jp/opeb/309/619). In response, OPEB has installed a carbon filtration system at the Chatan Water Treatment Plant to remove PFOS/PFOA from water coming from the sources around KAB, and it has been monitoring the levels of PFOS/PFOA at the sources. Despite OPEB’s efforts, however, the issue of PFAS contamination at the water sources around KAB remains unresolved.

It should be emphasized that the Chatan Water Treatment Plant provides drinking water for US bases in Okinawa via local municipalities. In fact, in light of the issue of PFAS contamination becoming public, KAB released an announcement to its community on January 27, 2016. The announcement, however, downplayed the seriousness of the issue. (See this site: https://www.kadena.af.mil/portals/40/documents/AFD-160124-001.pdf).

I am also very concerned that PFOS/PFOA have been detected in natural springs around MCAS Futenma and local community members have long used water from the springs, not as drinking water but for other purposes including growing agricultural products and domestic gardening. According to the most recent report by the Environmental Preservation Division at the Department of Environmental Affairs of the Okinawa Prefectural Government, the department in charge of safeguarding water sources other than those of drinking water, PFOS/PFOA (2,000 ng/L) were detected in the Chunnagaa spring in the summer of 2018. (See this site
https://www.pref.okinawa.jp/site/kankyo/hozen/mizu_tsuchi/water/documents/jfy2018s_report.pdf). The water from this particular spring is used for domestic gardening, which certainly poses a danger to the health and safety of the local communities. While the Department of Environmental Affairs conducts surveys twice a year (summer and winter), the issue of PFAS contamination at MCAS Futenma remains unresolved.

Our Concern: US Military Evading Its Responsibility
Despite all the survey data available and analyses of them point to the US bases as the sources of PFAS contamination, the US Military has not taken proper action. Instead, in my view, it has evaded its responsibility.

Between 2016 and 2018, the Okinawa Prefectural Enterprise Bureau held four meetings with KAB and the Okinawa Defense Bureau (Japanese Government) with an aim to discuss the issues of PFOS/PFOA related to KAB. During the meetings, however, KAB did not mention its on-site surveys in 2014, 2016 and 2017 (at 2 “hold ponds” and 16 “foam holding tanks”) and their concerning results. In fact, at no point, the US Military informed the Prefectural Government and the people of Okinawa that the military conducted on-site surveys regarding PFAS contamination.

In 2016, the US Military even declined the Environmental Preservation Division’s request for a meeting to discuss the issues of PFAS contamination related to MCAS Futenma. As IPP’s investigation using the Japanese FOIA has revealed, the Marine Corps Installations Pacific replied to the Environmental Preservation Division that “Since PFOS is not a regulated substance in the US and Japan, therefore there is no point in responding to additional questions or holding a meeting for which there are no established standards nor regulations.” The US Military’s declination was irresponsible, and its reply was contrary to the fact that DOD formally recognized PFOS/PFOA as “Emerging Contaminants” in 2009.

Moreover, the US Military has rejected the requests by the Government of Japan and Okinawa Prefectural Government to conduct surveys regarding PFOS/PFOA on the bases. The Department of Defense’s report Addressing Perfluorooctane Sulfonate (PFOS) and Perfluorooctanoic Acid (PFOA), which was issued in March 2018 as an official response to the House Report 115-200, did not even include these test results from KAB and MCAS Futenma although it addressed test results from other US bases overseas.

Our struggle and Obstacles
The US Military has not been forthcoming with information on PFOS/PFOA on KAB and MCAS Futenma. It has not allowed the Okinawa Prefectural Government or the Japanese Government to carry out surveys on the bases. As a result, no comprehensive study and no sufficient clean-up of PFAS contamination have been carried out on Okinawa. No effective measure has been set up or implemented to safeguard the future of Okinawa. All the while, members of the communities, including members of US bases on Okinawa, are constantly exposed to the danger of PFOS/PFAS.

IPP and community members of Okinawa have been struggling to change this situation. We have spent so much time and energy to try to address the issue of PFAS contamination and protect ourselves and our environment. So far, we have made little progress. The US military remains indifferent to our concerns, and the way the Status of Forces Agreement (SOFA) between the US and Japanese Governments has been interpreted and implemented remain obstacles to our struggle.

We are also concerned that the February 2019 (delayed) action of the US Environment Protection Agency addressing PFAS contamination is not enough. As in most of the states in the United States, the Okinawa Prefectural Government has used the EPA’s Health Advisories as its guidelines and standards to evaluate the safety and quality of water contaminated by PFOS/PFOA. We believe that more stringent safety standards and measures have to be adopted.

Our Requests
It is imperative that proper action has to be taken in Okinawa and Japan and in the US. I thus wrote a letter of request to the Okinawa Prefectural Government, requesting them to review its policies on the issues of PFOS/PFOA contamination. I am now turning to the Senate Committee and respectfully request the Committee as follows:

1) Discuss and review the issue of PFAS contamination on the US military’s bases overseas and affected local communities around the bases;

2) Hold the U.S. Military accountable for the issue of PFAS contamination on Okinawa by encouraging the US Military to be more forthcoming with information and by collaborating with the Okinawa Prefectural Government to conduct surveys on the bases;

3) Recognize that the SOFA violates the environment and human rights of the people of Okinawa.

Thank you for your time and attention to the issue of PFAS contamination on Okinawa.